Is Modbus the same as RS485 - RS485 communication tutorial

RS485 is a serial data transmission standard widely used in industrial implementations. The Modbus protocol is commonly used when implementing RS485 communication. This differentiates RS485 from the RS232 protocol which communicates by transmitting with ASCII characters. It is important to understand Modbus if you will be working with devices using the RS485 protocol.

If you are a technician responsible for supporting RS485 devices, there are some techniques that can make your job easier. We present this short tutorial that demonstrates the differences in the Modbus vs RS485 protocols.

What is RS485 communication?


RS485 is a protocol similar to RS232 that is used to implement serial data communication. The two protocols use different electric signals to enable data transmission.

One of the reasons that RS485 interfacing is employed in industrial settings is its ability to serve several devices attached to the same bus. This eliminates the need to have several interfaces available when querying multiple devices. You can do this by using a bus terminator, moving a switch or with a small resistor screwed onto a terminal.

Care must be taken to ensure that the correct interface is being used as the RS485 and RS32 protocols are not completely compatible. You can construct a gateway between RS232 and RS485 interfaces, but usually you will see the RS485 protocol connecting directly to USB, GSM or Ethernet ports. This less expensive approach removes the requirement for any additional components to be used.

Below is a table that summarizes the characteristics of the RS485 protocol. RS485 provides half-duplex transmission on a balanced line covering distances of up to 1.2 km.


If you desire more information regarding RS485 you can consult the EIA (Electronic Industries Association) or companies such as Texas Instruments or Maxim Semiconductors that manufacture devices compatible with the protocol.

What is half-duplex system?

A half-duplex system is comprised of one or more transmitters and receivers where only one transmitter can be active at a time. Communication is enacted by a transmitter making a request directed at a specific receiver. The transmitter then waits a pre-determined length of time for a reply or decides that no reply will be forthcoming from the receiver.

An RS485 network is built based on a master/slave framework. The master performs the role of the transmitter, making requests to a designated slave which acts as the receiver. The master listens for the response and if not obtained in an appropriate time-frame will terminate the communication.

The principle of Modbus messages. In a Modbus RS485 Network, communication begins when the master device sends a query to a connected slave. A slave device spends its time monitoring the network for queries specifically addressed to it. When a query is received, it will either perform an action or reply with a response to the master. Queries are only initiated by the master device. 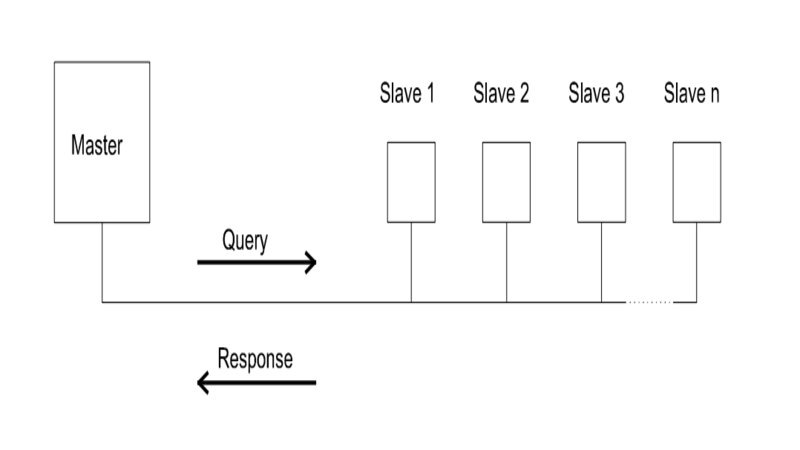 The Modbus protocol affords the master the choice of addressing messages to specific slave devices or communicating with all slaves simultaneously. This is done using a special “Broadcast” address. Some products such as those from Integra and SPR do not support the use of this broadcast address.

Read and write operations are sent through Modbus messages using coils. A coil consists of 16-bit words and binary registers. A slave can only respond to a received message and never initiates communication with the master.

Each slave device attached to the RS485 bus in parallel is assigned a unique Modbus slave ID. All Modbus communication begins with the slave ID being sent, either to alert a slave device to accept a query or inform the master which device supplied the reply.

In the same way that RS232 connectivity works, slave and master devices need to be configured correctly. Parameters such as speed and parity need to be synchronized throughout the network.

The message format is used in Modbus communication between master and slave is defined in the protocol.

A Modbus query is made up of the device (or broadcast) address, a function code that defines any requested action, data returned with the request, and an error-checking field.

A Modbus response is comprised of fields that verify the requested action has been taken, data sent with the response, and an error-checking field. The slave device will create an error message as its response if it is unable to fulfill the request or if errors impacted the receipt of the message.

Modbus ASCII (American Standard Code for Information Interchange) mode sends each 8-bit message as two ASCII characters. Advantages of ASCII mode include the ability to easily monitor messages on a text console. This mode also allows for a one-second interval to be acceptable without initiating a timeout.