RS232 and RS485 difference - use cases and technology

A serial port is a communication interface over which serial communication can take place. On IBM compatible computers they are often referred to as COM ports. They allow external devices that transmit data serially to be connected to a host computer and allow two-way communication between the host and the device.

The RS232 interface or TIA/EIA-232 is a data transfer protocol designed to control serial communication. It is used to organize the data flowing from a piece of Data Terminal Equipment (DTE) like a terminal or transmitter to a receiver or other type of Data Communications Equipment (DCE).

The distance between the devices directly impacts communication speed. Serial communication can be established in either full-duplex or half-duplex mode. Full-duplex allows data to be sent and received simultaneously by using different wires for transmission and reception. In a half-duplex implementation, a single line is used for both transmitting and receiving data resulting in more limited operation. Half-duplex can be set to transmit or receive data, but not both at the same time.

What is the RS485 protocol?

The most widely used serial interface in industry is the RS485 or EIA-485 protocol. It has a major advantage over RS232 interfaces. Through the use of multi-point topology, multiple receivers and transmitters can be connected. Data transmission is done using differential signals for more consistency.

What is the difference between RS232 and RS485 serial ports?

RS232 and RS485 are two standards for electrical transmission that was in existence before the introduction of personal computers. They are employed in interfaces that enable serial communication between computers and peripheral devices. While they both serve the purpose of allowing serial data transmission, the RS232 and RS485 protocols have some differences. Let’s see where these protocols differ.

The main difference between RS232 and RS485 serial ports are in:

- Mode of operation
- Communication distance
- Voltage levels
- The number of contacts in use, etc.

So let’s take a look closer at these differences.

The number of wires - An RS232 cable is typically comprised of 9 different wires, though in some connectors, 25 wires are used. Each wire serves a distinct purpose in the data transmission. RS485 cables only have three wires, 2 for data transmission and 1 for the ground.

Two-way transmission - RS232 is full-duplex, meaning that it can transmit data in both directions, both sending and receiving. To achieve duplex communication with RS485 you need another set of wires. Native RS485 is half-duplex, meaning it can only transmit in one direction at a time.

Where is the serial data transfer
protocol used?

Serial data transfer using the RS232 or RS485 protocols are no longer the standard for consumer computer or electronic peripheral devices, having been replaced by USB and other protocols. Serial transmission is still used extensively in industrial monitoring and embedded systems and can be used with converters on USB equipped machines.

RS232 allows direct control of industrial devices like UPS systems without the need for software assistance. Many industrial sensors and monitors employed in the Industrial Internet of Things make use of serial communication. It is also widely used with scientific and medical equipment. The RS485 protocol has found a widespread application in CCTV (Closed Circuit TV) cameras.

If you work with serial interfaces and devices you may be in need of some software tools to assist you in carrying out your duties. Eltima software has developed three applications that make it easy to work with serial devices and extend their capabilities.


How to emulate a serial port in your system

Virtual Serial Port Driver - This software utility allows you to create an unlimited number of virtual serial port pairs that emulate and behave as if they were physical COM ports. 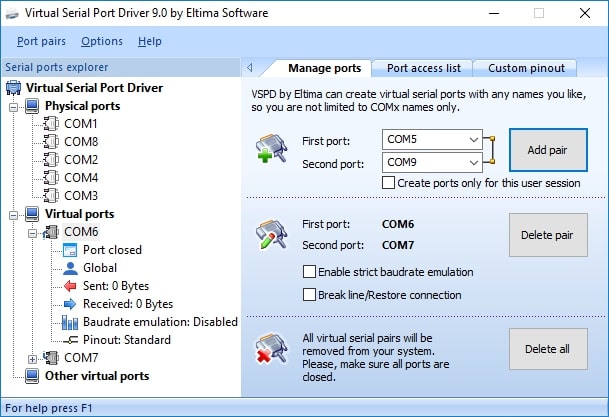 The tool does not use any of your real serial ports and can be used on machines that do not have any COM ports. Ports are recreated after a system reboot, and higher speed data transfer is possible through the virtual serial ports that when using physical ones. These are just some of the features of this dedicated serial port software application.

Serial to Ethernet Connector - If you have a need to access your remote serial devices over the network, this software application is a perfect solution. 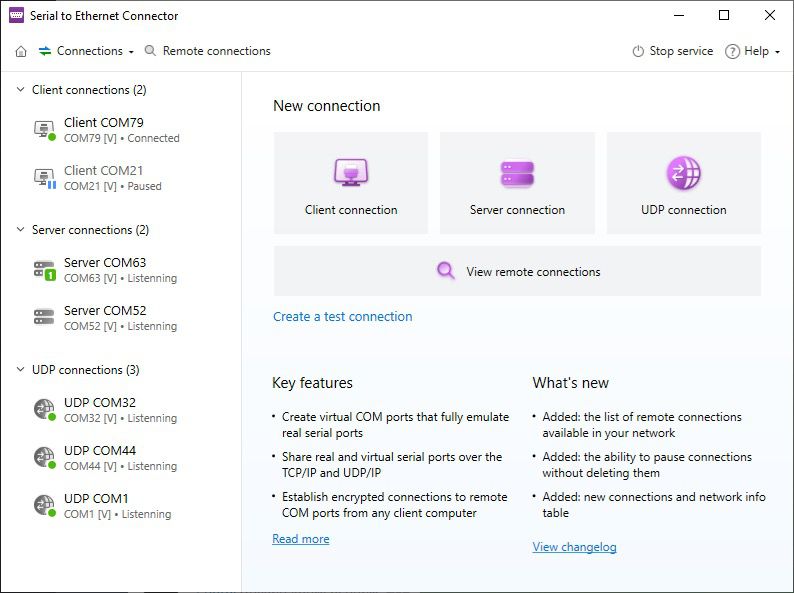 It is designed to let you share an unlimited number of physical and virtual serial ports over any TCP/IP or UDP/IP network. You can create any number of virtual ports and name them in any way you like, and the networked serial ports can be used with virtual machines. It is a complete solution to the problem of controlling and accessing remote serial devices.


How to monitor and analyze serial port activity

RS232 Analyzer - Here is a full-featured tool that has been developed to facilitate the monitoring of serial ports and is an indispensable tool for developers of serial applications. It enables you to track and analyze data flowing through all of your serial ports in one convenient log and allows you to look at the data in various display modes. You can monitor ports already opened by other applications, and emulate the sending of data to serial devices. Among its other features is a playback option that lets you send the same data multiple times and will automatically compare the results and display differences. 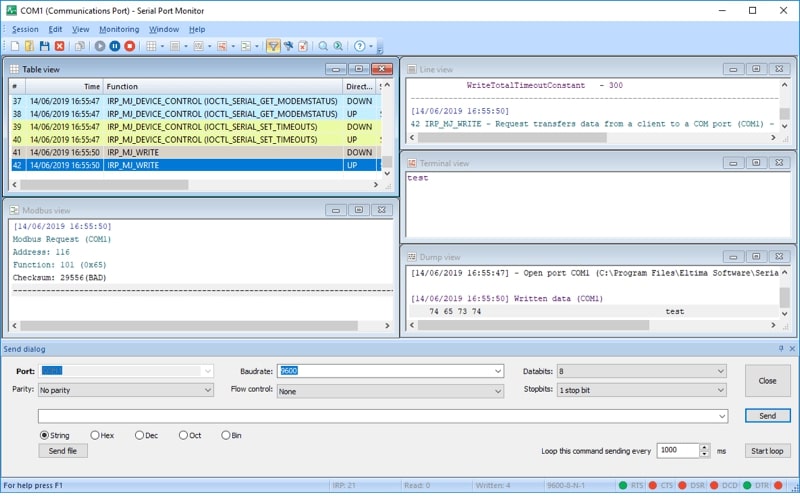 Eltima has extensive experience in the field of serial communication and these are mature software applications. If you work with serial devices and ports, you owe it to yourself to take a look at how you can benefit from these products.

Communication scenarios traveling over short distances that can tolerate low transmission speeds are best served by the RS232 protocol. It is simple and inexpensive to implement with readily available stock components such as UARTS, drivers, and connectors available for constructing the interface. Data rates of 2 to 3 Mbits/s can be achieved for lines of limited length. Integrated circuits employing RS232 interfaces can make use of a single 3.3- or 5-V power supply with the inclusion of a charge pump and converter that supply positive and negative voltages.

RS485 is better suited for high speed and long-range communication where the capability to implement duplex networking is desired. As with the RS232 interfaces, components are readily available for designing the interface. The receivers and drivers in circuits enable more than 32 drops with data rates that can be as high as 40 Mbits/s. You can find ICs that support the RS485 protocol featuring converters to provide dual supply voltages.